The numbers are in from the 2009 online holiday shopping season, and it could be a good sign for the economy.  In the report from comScore, the e-commerce industry faired better than the same time in 2008.

“During [November 1- December 24], approximately $27 Billion was spent online, which represents an increase of 5 percent over the same period a year ago,” said the comScore Press Release. For the period from Black Friday through Christmas Eve, and after adjusting for the additional shopping day in 2009, sales grew by approximately 3.5 percent.”

The report also noted that social networking sites, like Facebook & Twitter, played an important role in this years shopping experience.  “This was also a year when retailers substantially boosted their use of social network marketing and the larger retailers significantly outperformed their smaller brethren. In these tough economic times, the retailers with sufficient financial resources and a willingness to invest in aggressive marketing and free shipping offers were clear winners.” 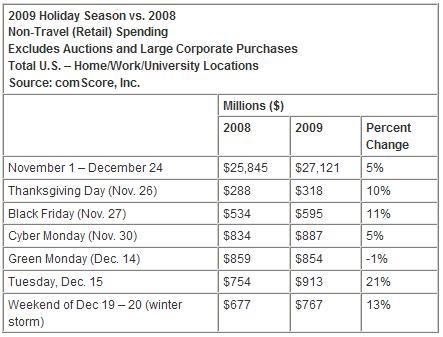