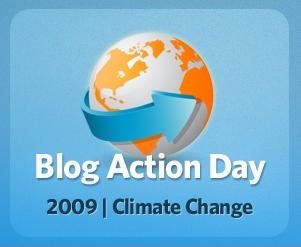 Blogger’s from around the world today are blogging about climate change and the environment as part of Blog Action Day 2009.  What is considered one of the largest social change events on the web, ever, Blog Action Day is an annual event which finds a world issue and brings bloggers together to not only bring awareness to everyone but also try to find solutions to the problem.  This year over 10,000 bloggers are writing about climate change and the environment for readers around the globe.

Many people around the world are  against the idea of “global warming” and when they hear that studies say the world’s average temperature may rise 2-3 degrees Fahrenheit, they say “what’s the big deal? It’s not that much of a difference.”  But think about it.  Maybe it is a huge difference.  Take the average healthy human for example.  The average temperature for a human is around 98.6 degrees and when our temperature goes up above 100 degrees, we feel sick, start sweating, and don’t fee good.  Well the same concept goes with the Earth.  It is a living thing, so those 2 or 3 degrees could mean drastic changes.

So what can the social networking world do to make the world go ‘green’?

As part of Blog Action Day, Google blogged about how they are helping the environment.  And what they are doing is pretty remarkable.  For example, there is a big grass field at the main Google Campus, and instead of hiring someone or a company to mow the grass, they rent about 200 goats every few months, to eat and take care of the grass naturally.  Google says it may take a big longer to get it shorter, but it’s helping the environment and costs about the same as hiring someone to cut it.  Since Google has many buildings in an area, instead of having people drive from one building to another, they have company bikes for employees to travel to and from other buildings with.  They also have  8 plug-in vehicles that Google employees can use free of charge to run errands during the day. And the energy that powers the cars is powered by a solar powered garage right above the cars.  Google has said they can get nearly 90 MPG in the cars.  Those are just some of the things Google is doing to better the environment.  If you want to find out what else they are doing you can read their Google’s Green Page.

Now believe it or not there are social networking sites that are all about climate change and the environment.  And yes, people are addicted to those sites, like they are with Facebook & MySpace.  Below is a list the Green Social Networking sites that maybe worth checking out.

1. Change.org: Change.org is actually this year’s sponsor and leaders for Blog Action Day.  The website takes a look at several social issues from education, animal rights, and poverty just to name a few.  You are able to read blogs, stories, and sign petitions on any issues you feel you need to and then the company will take those petitions to Congress.  You are also able to donate if you have a certain cause if you truly wanted.

2.  MakeMeSustainable.com: Probably the favorite out of the list, Make Me Sustainable is most like popular social networking site such as Facebook. Not only are you able to have friends and post pictures, but it is all about going green.  You are able to post what you do and don’t do with environmental calculators to find you carbon footprint, and in return the site gives you ideas how to reduce it.  It also gives you a bank of how much money you saved, and it will tell you where you saved most of your money.  Joining a group with your friends will show how much carbon everyone has cut down on as a group and gives you the equivalent of how many cars you have taken off the road.

3. CarbonRally.com:  What’s cool about this site is  not only can you track your progress in helping the environment, but you can also get paid and/or win prizes for it.  Like the name says, the website is trying to get a rally of individuals, companies, groups of friends together to compete in environmental challenges.  A new challenge is released every few weeks, and ranges from giving up paper towels for a month, to biking to work or school once a week, and even creating a worm compost bin for your kitchen.  Users can also write and comment on the sites blogs.

4. Celsias.com: Celsias is the place to get all your latest news, blogs, and much more on climate change.  Users can also connect with others in there area and find out what volunteer projects are happening.  And like most of these sites, you can sign a petition and pledge to do a certain “green” activity.

5. BigCarrot.com: Still in Beta, Big Carrot is another site which awards you cash for your contributions to going green.  Given a certain unique challenge, users can earn cash prizes of at least $100.  The site is currently offering a cash prize of $515, to anyone who can “provide a JavaScript software fix which will provide predictable behavior when creating or modifying lists with TinyMCE.”  Besides the competition, users can also write in forums and converse with others and help each other out.

6. SocialVibe.com: Finally SocialVibe is nearly 2 years old with about a million users.  The site allows users to create a badge for their websites and blogs.  In return each time their page is visited, each view receives a certain amount of points which ends up translating into a dollar and goes to an organization of the users choice from the list on SocialVibe.  The site has raised over $25,000 for the World Wildlife Foundation, and nearly $500,000 total for all the organizations.