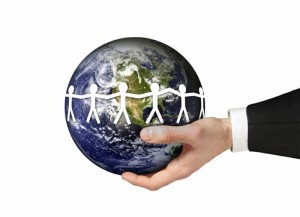 Despite the fact that social networking sites were originally created to facilitate communication between people around the globe, they have morphed into a powerful, free tool for business marketing. And since companies like Facebook and Twitter were founded in the United States, it’s natural to assume that Americans are the ones who are using these tools to the greatest advantage. But according to a new survey from Regus, the US actually is behind the global average when it comes to using social media to attract customers.

Just 35 percent of companies in the US say they have garnered new customers via social networking, compared to a global aver of 40 percent. The US ranks eighth behind established global players like Germany and China, as well as emerging economies like India and Spain. With 38 percent of small businesses and 27 percent of large corporations currently using social media, it certainly isn’t a secret here in the US, which begs the question: why are we so ineffective at using it?

Part of the problem may be that people don’t yet turn to social media when they are looking to make a purchase. Personally, I know that I disregard the vast majority of advertisements I come across when browsing the web. And the thinly veiled attempts to disguise advertisements in games, pop-ups and faux news stories aren’t fooling anybody. Since we are constantly flooded with commercials, sales pitches and advertisements, we’ve trained ourselves to disregard most marketing tactics.

If your blog posts, tweets and profile pages are overtly peddling your product, it’s an immediate red flag for consumers. Keep in mind that most people go to social media for entertainment—whether it’s connecting with friends, playing games or gleaning information on a topic—so your social media presence should be catered to these tastes.

Uploading a video, writing a product review or highlighting new research in your industry are ideal ways to promote your business without blatant advertising. Remember: It doesn’t benefit you to be adding spam and sales pitches to your profiles constantly; in fact, it will actually deter followers.

An important factor to consider when reviewing the data from Regus is that they only consider new customers. However, building a brand name and connecting with past customers should be one of your top social networking priorities. People who have already used your product or service are much more likely to frequent your online profiles than someone who has no past affiliation with your company. With this in mind, be sure to have opportunities for customers to give feedback, offer special discounts to people who follow you, and provide incentives for those who invite their friends.

Building your social network is an ongoing process, and by encouraging people to invite their friends you open the door for exponential growth. Attention spans on the internet can be measured in microseconds, so be sure to integrate quick and easy links for people to repost your information to their account and recommend your company to their friends.