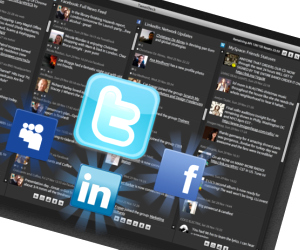 A few weeks ago when I talked about the future of social media, one of the things I mentioned was how Twitter was going to become our news source.  Next month, five journalist are actually going to test out the method of only getting news from only Twitter and Facebook.  The “Behind Closed Doors on the Net” experiment’s goal is to see if the journalist can actually write articles based on facts mentioned on the social networks.  The only way to do that, is take away and block all other communication technologies.  That means no phone, radio, or clicking on links attached to the social networks.

I’m looking forward to seeing how the journalist do in the experiment.  Can anyone really just get their news from Twitter and social media alone?  I say “Yes & No.”  I think Twitter is a great tool for overviews, and for discussion.  However some stories are best told by social media.  The Iran election from last summer is a great example.  Although journalist were banned from covering it, the citizens of country took our their cameras, and shared what was happening with the rest of the world.  While this was everyone’s only option to learn about developments, it opened the doors to citizen journalism, allowing anyone to tell a story, and in some cases, like this situation, made the story more real.

It only takes one tweet to make a story.  Take Twitter user @OGLE_Toronto for example.  Last Friday, she had posted a tweet with a photo attached of a Toronto Transit Commission (TTC) worker sleeping on the job.  It almost instantly caused a media frenzy and since that posting, the photo has been viewed over 43,000 times. The TTC is turning the tables however saying that @OGLE_Toronto didn’t check to see if he was actually sleeping, and he could have been passed out due to a medical condition. But other’s say, they don’t care.  The photo is not helping the TTC at all as passengers have recently been angered by the fare increase to ride the unreliable Toronto public transportation. This tweet however is a good example of one tweet can create a good news story, since it’s being played out on the social network.

A bad exmaple of news is from early Monday morning.  Rumors swirled on Twitter that actor Jonny Depp had died.  It even made it to the trending topics causing a panic among many Depp fans. Needless to say Depp is fine, but rumors like this can rapidly spread through social networks and start a firestorm of false information.  However, as quickly as the story starts, it seems to dropp right away as well.

So Twitter, as a new source as it’s flaws that need some “tweaking” but if done correctly, it could be a very powerful source.  Like I said I’m very interested in seeing how the journalist do next month.  We’ll keep you updated.