By Jason Thurston In E-commerce Basics 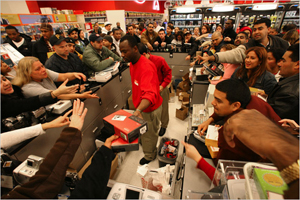 On Black Friday millions of Americans fought the shopping crowds to get the best deals at stores like Wal-Mart and Best Buy. In fact, many Americans camped out in store parking lots Thanksgiving night just to make sure they’d be one of the first people through the doors.

The economic crunch has put a strain on shoppers’ budgets this year, but you wouldn’t know that with the throngs of people lined up outside stores last Friday morning. This year people know what they want and where to get the best deal on it.

But when the spoils of shopping begin to outweigh the benefits: is it really worth battling the crowds to shop on Black Friday when you can save time, money and stress by shopping online?

On Black Friday morning at a Wal-Mart security worker in New York was killed when a mob of shoppers crashed through the store’s doors trampling him. The worker was apparently trying to hold the crowd back until the store opened at 5 a.m. Though the man was on the ground and gasping for breath, shoppers continued to step on him. The security guard was pronounced dead after arriving at a local hospital. This isn’t the first time this has happened at Wal-Mart; a Wal-Mart customer was allegedly trampled to death just last year on the same day.

When a shopping expedition turns into a matter of life and death it’s time to consider some alternatives. The simplest alternative to shopping in stores is shopping online. Who wants to fight the crowds on the day after Thanksgiving, or on Christmas Eve, when they can shop in the safety and comfort of their own home? I can think of countless reasons to shop online, but I have decided to list only the top three: