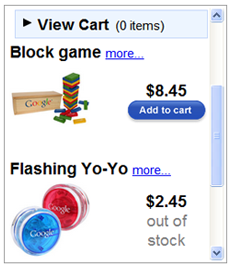 In their continuing effort to dominate every aspect of your online experience, Google has taken e-commerce to the masses with the experimental release of the Google Checkout Store Gadget, a simple application that makes it possible for anyone with a blog or website to create an online store, with Google Checkout, in under 5 minutes. Google makes it sound very easy when explaining how to setup the gadget and manage the store, and with Google’s popularity and typical wide-spread adoption, this just might be the breakthrough many people need to open up the floodgates to selling online. Although still in beta-mode, Google Store Gadget has the potential to significantly empower those who normally could only turn to sites like Ebay for their e-commerce ideas.

Setting up the Google Checkout Store Gadget seems easy enough. Google states that there are 3 simple steps to getting up and running:

All of these steps are obviously free and can be done by even those with very limited coding knowledge. Managing inventory in a spreadsheet and setting it up are as easy as clicking a few boxes to share it online and publish it as a website. Embedding the gadget can be done basically anywhere, as long as HTML code can be added to a site. This means bloggers, website owners and more can quickly add the gadget to their site, enabling product or service sales without the typical hassle of an e-commerce management platform.
END_OF_DOCUMENT_TOKEN_TO_BE_REPLACED 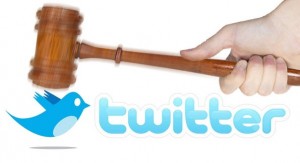 It was only a matter of time before Twitter became a subject of legal questions. In a bigger picture, however, this happening begs a much deeper question: What is considered public conversation, and how liable are people for that conversation?

On July 27th, less than a week ago, Horizon Group Management of Chicago, a property management company, filed a lawsuit against Amanda Bonnen, one of their former residents, for an update she posted on Twitter. Specifically, the update referred to the realty company and mold in Bonnen’s apartment: “Who said sleeping in a moldy apartment was bad for you? Horizon realty thinks it’s okay.” The lawsuit, filed in Cook County court, asks for $50,000 in damages, alleging that her statement damaged the company’s business reputation.

Putting personal opinions of this lawsuit aside, it raises serious questions about what we can and can’t be held liable for on a public forum, and what exactly Twitter can be called in relation to those forums. Many people tweet complaints about products, services and companies. Many companies embrace Twitter as a gateway into the  real-time pulse of their customer base, and respond accordingly. Comcast, for example,  solves many technical questions and issues via Twitter and have benefited from being known as a tech-savvy and customer-friendly company, meeting their customer base on their turf, and helping out accordingly. Contrast that to Horizon’s handling of this issue (specifically with legal papers) and there has been quite a backlash of sorts online, with many people stating the obvious PR nightmare this has caused for the property management company and weighing in with opinions of how it could have better been handled.
END_OF_DOCUMENT_TOKEN_TO_BE_REPLACED